This Toddler Storytime was presented at Bellevue Public Library on October 22, 2014. 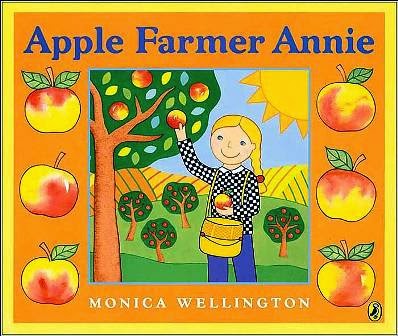 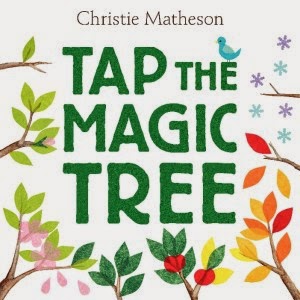 (Wesley is my turtle puppet who pops out of my apron pocket whenever we sing this song.  Then he sits quietly on his rock and listens to the stories and sings along with us.  At the end of storytime he says goodbye to the children, gives them high fives, eats pretend food from their hands, blows kisses, and plays hide and seek!)

Wesley had a special surprise for me today at Storytime.  When I reached in my apron pocket I discovered an apple!  I quickly realized it wasn't an ordinary apple - there was something inside it! 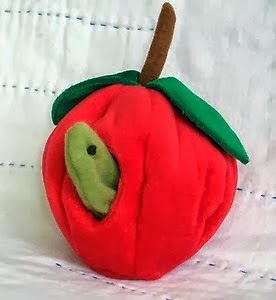 Apples juicy, apples round,
On the tree or on the ground.
Apples yellow, apples red,
Apple pie and juice and bread!
Apples crunchy, apples sweet,
Apples are so good to eat!

Take an apple, round and red,
Don't slice down,
Slice through instead.
Right inside it you will see,
A star as pretty as can be!

Before I began this rhyme, I showed everyone an apple I had brought from home.  As I read the poem, I showed what happens if you "don't slice down"... 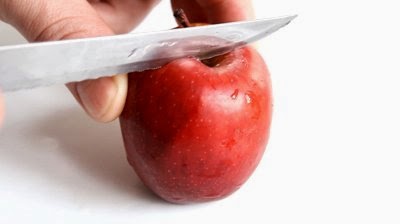 but, rather, "slice through instead": 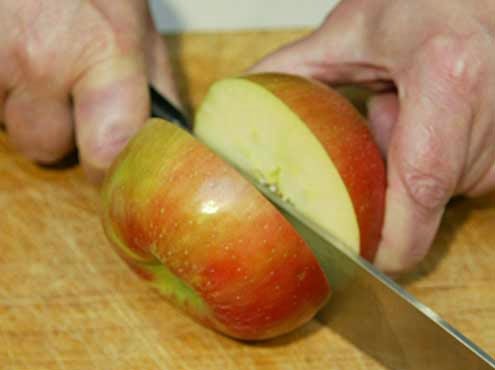 When you pull the halves apart, you can see "a star as pretty as can be!" 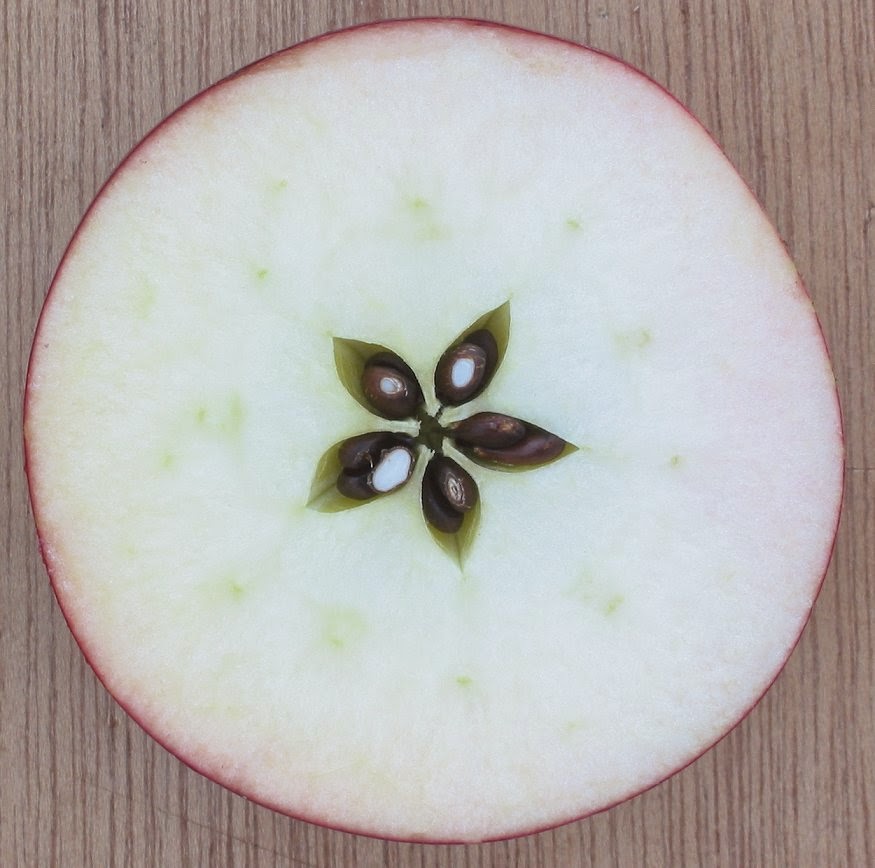 Way Up High in the Apple Tree

Way up high in the apple tree,
Two red apples smiled at me.
I shook that tree as hard as a I could
Mmmmmm - they were good!

We always say this rhyme at least twice, increasing the speed with each repetition! 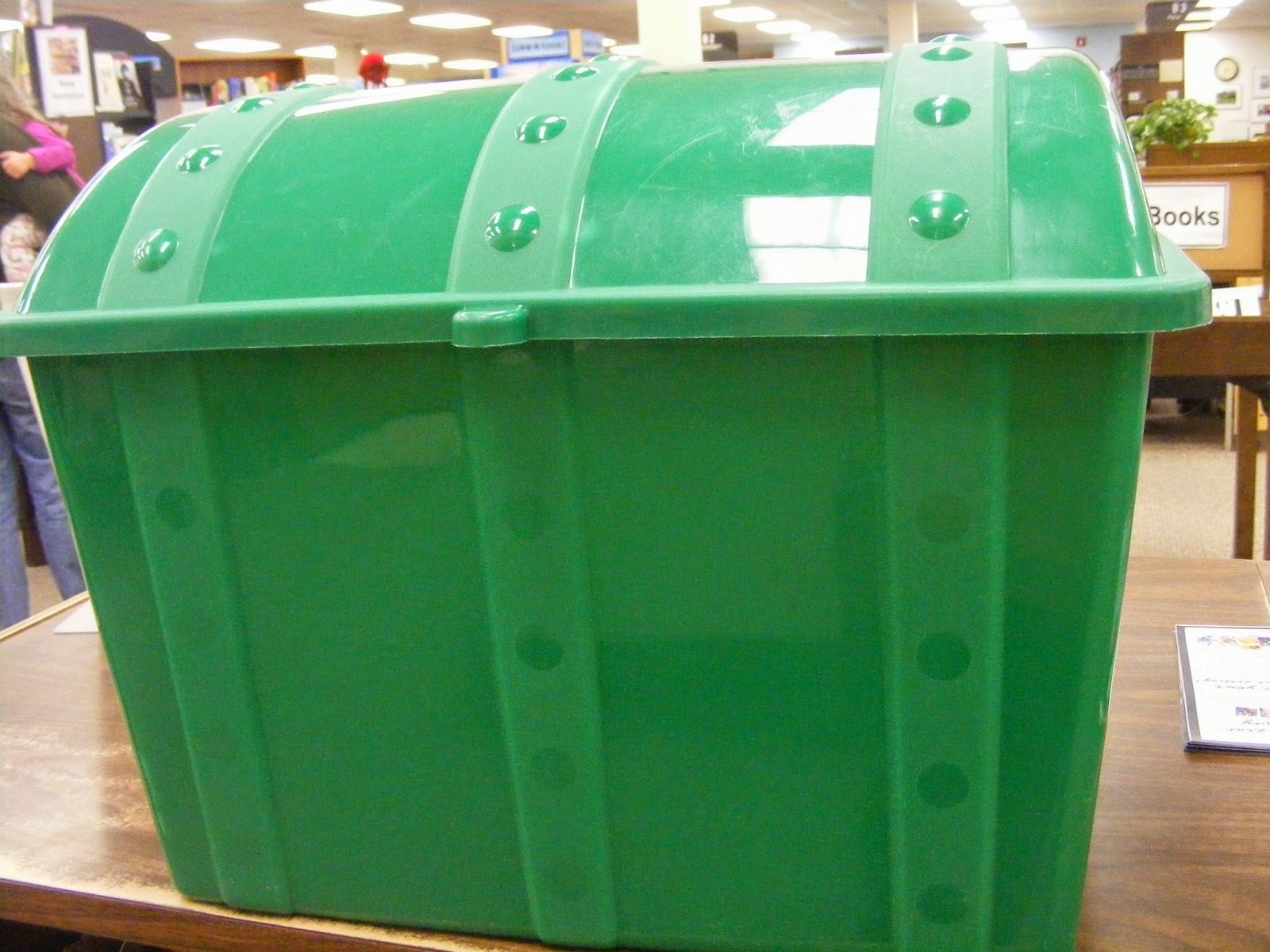 Today I pulled the following things out of the green box: 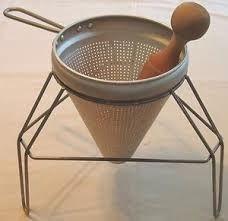 and a potato masher: 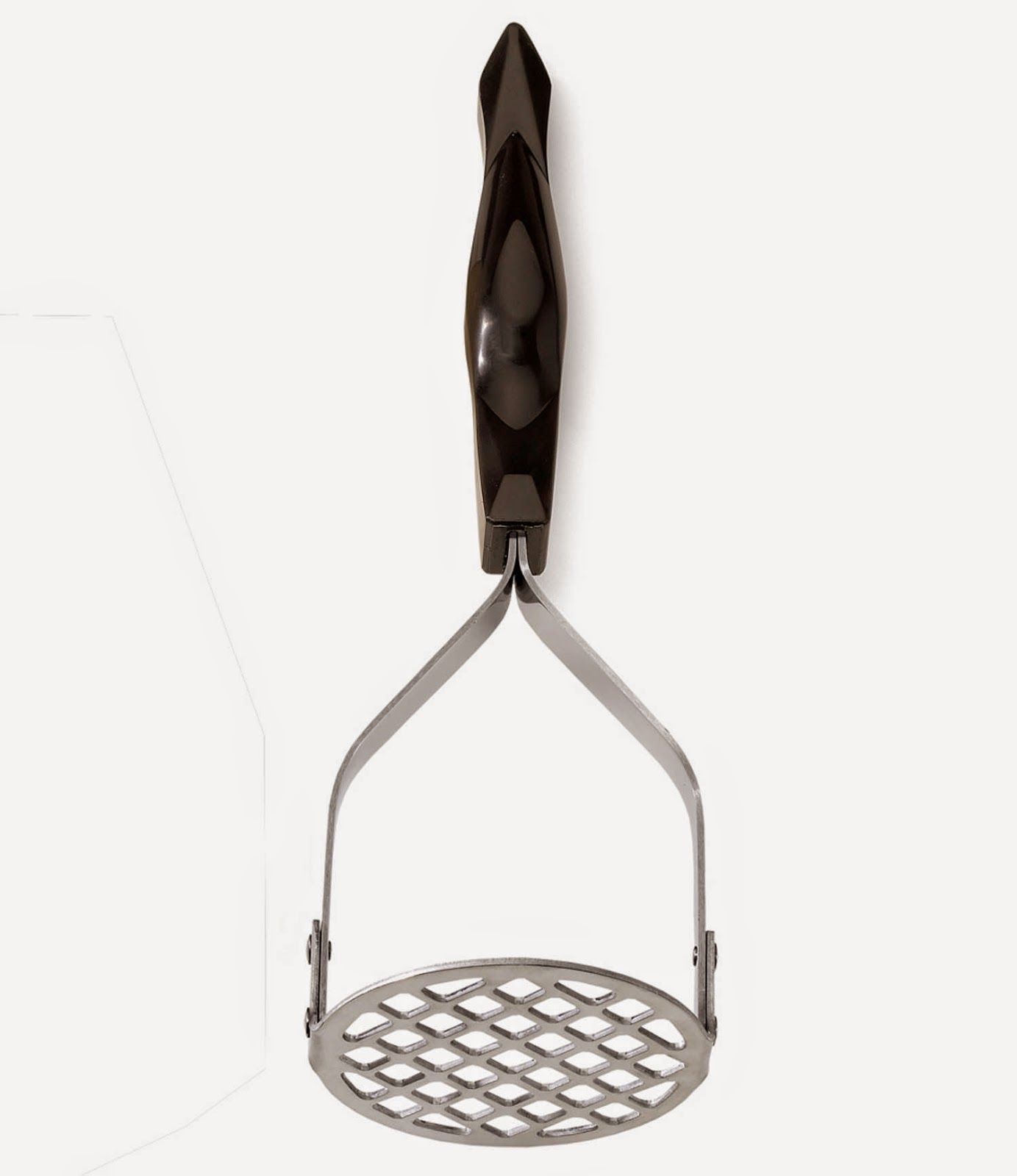 After Storytime we moved out into the Children's area to try our hand at making applesauce.  Everyone pretty much agreed that using the applesauce cone was "A LOT HARDER" than using the potato masher!

This activity proved very popular last year when we made applesauce during one of our Momaha Storytimes.  You can see photos from that event here.


We went through half-a-roaster-full of cooked apples! 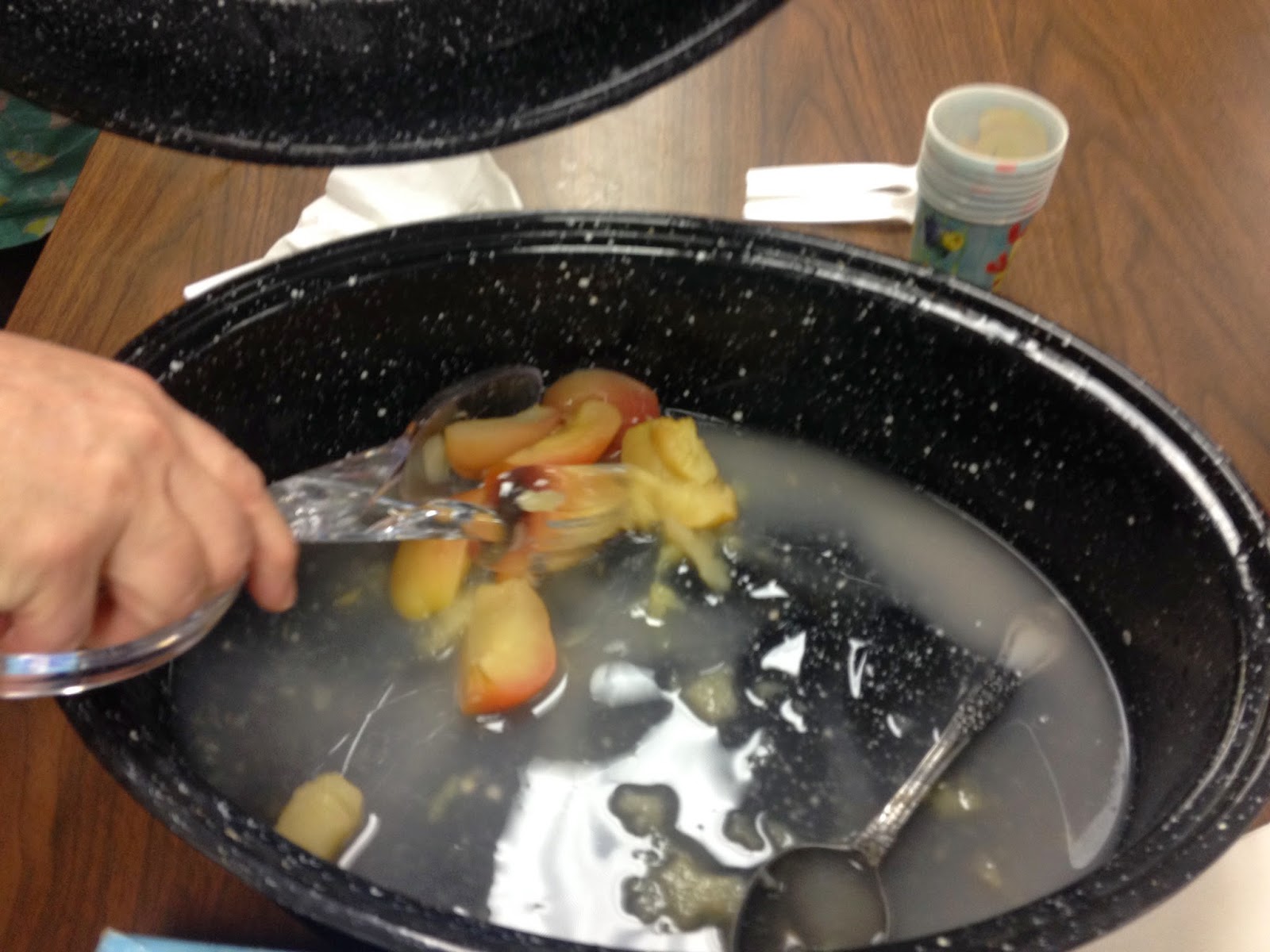 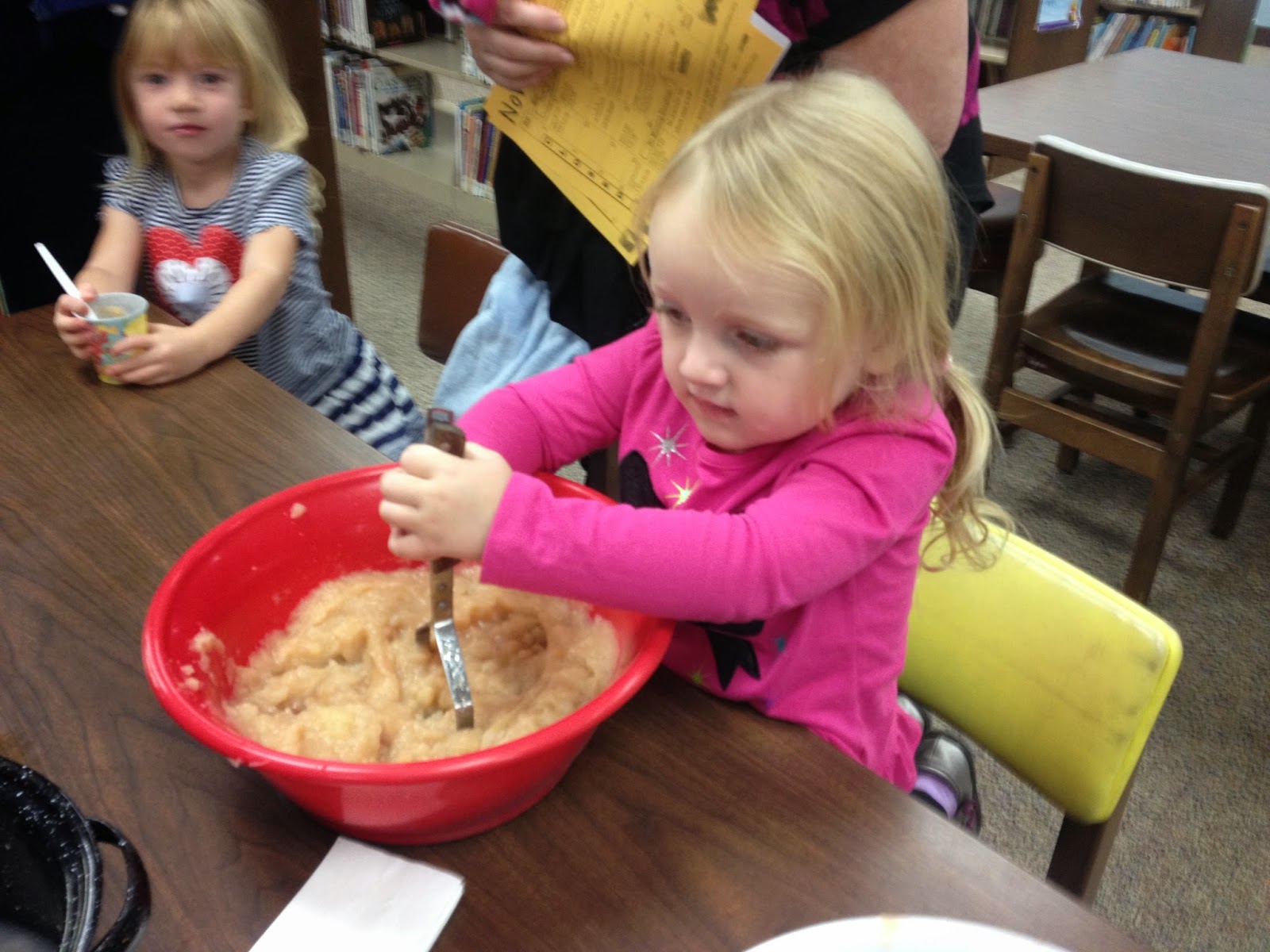 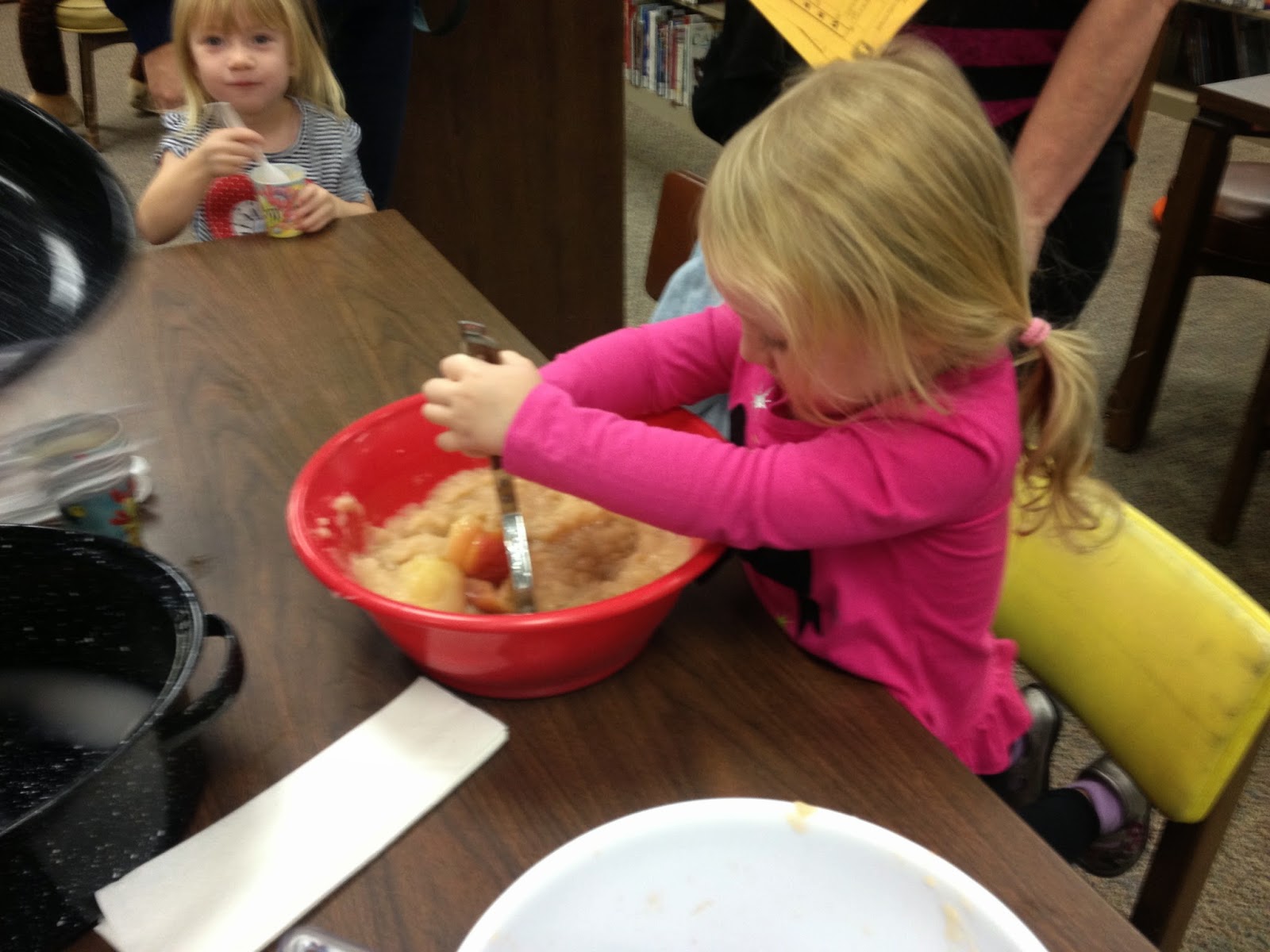 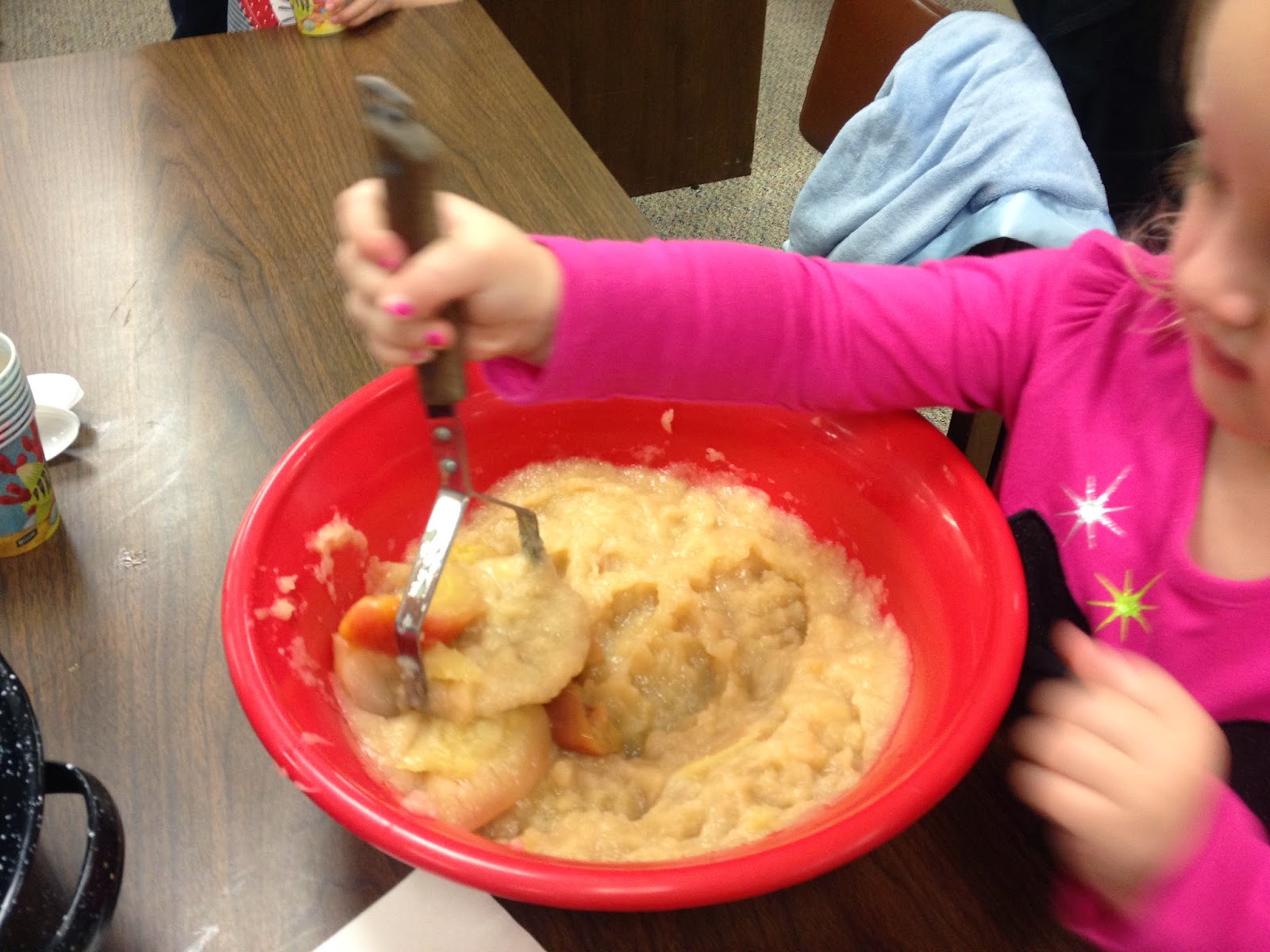 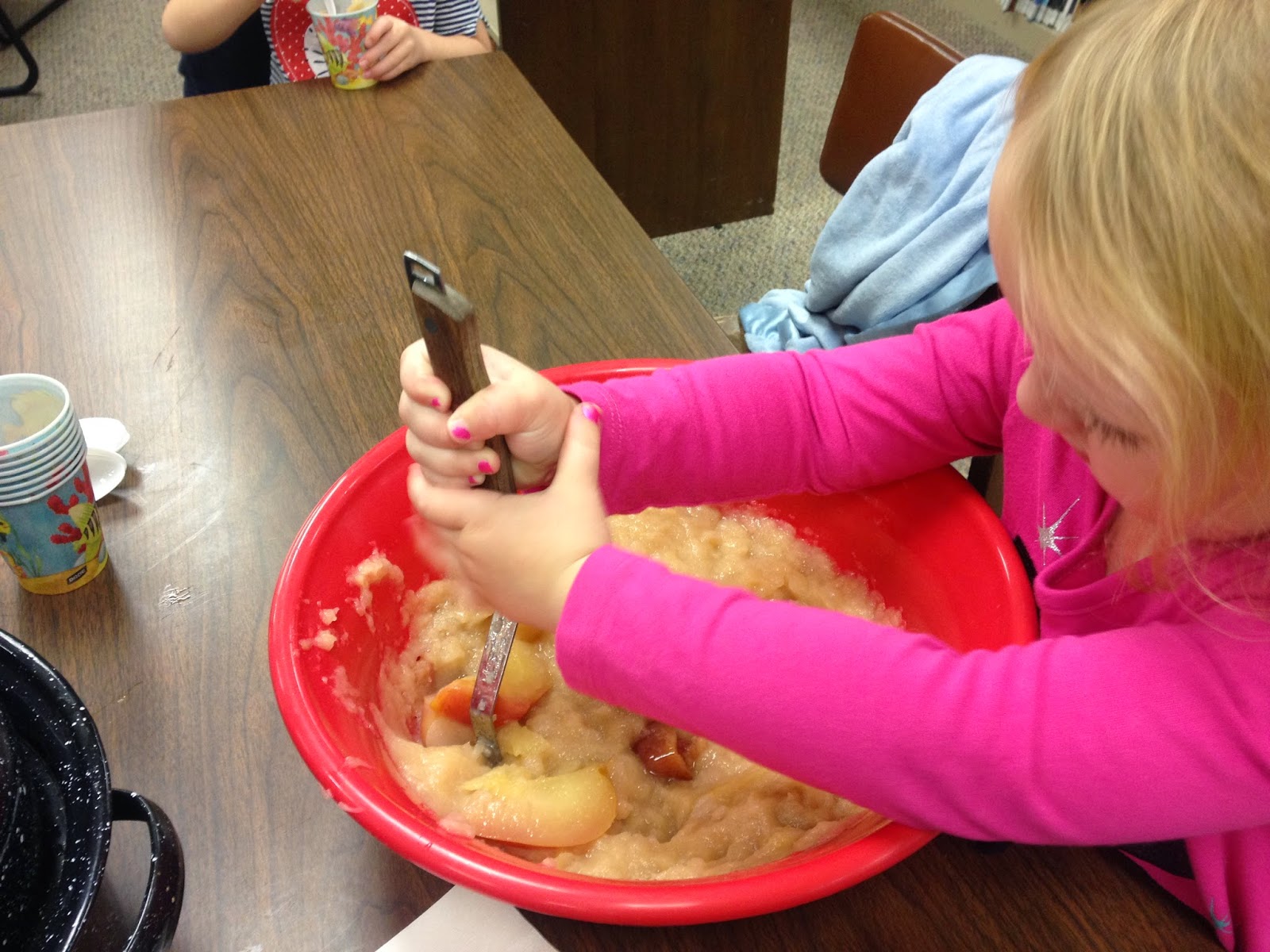 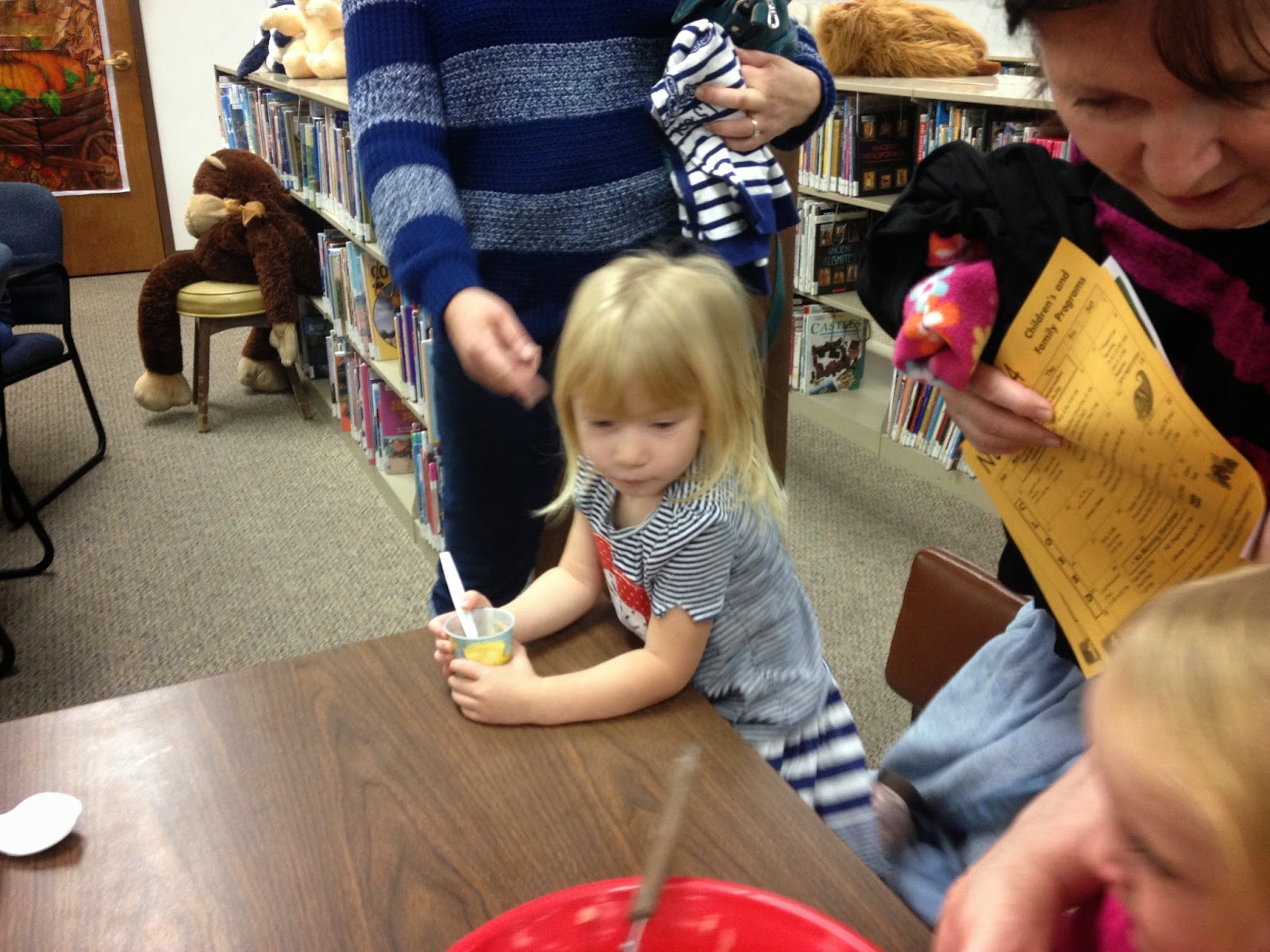 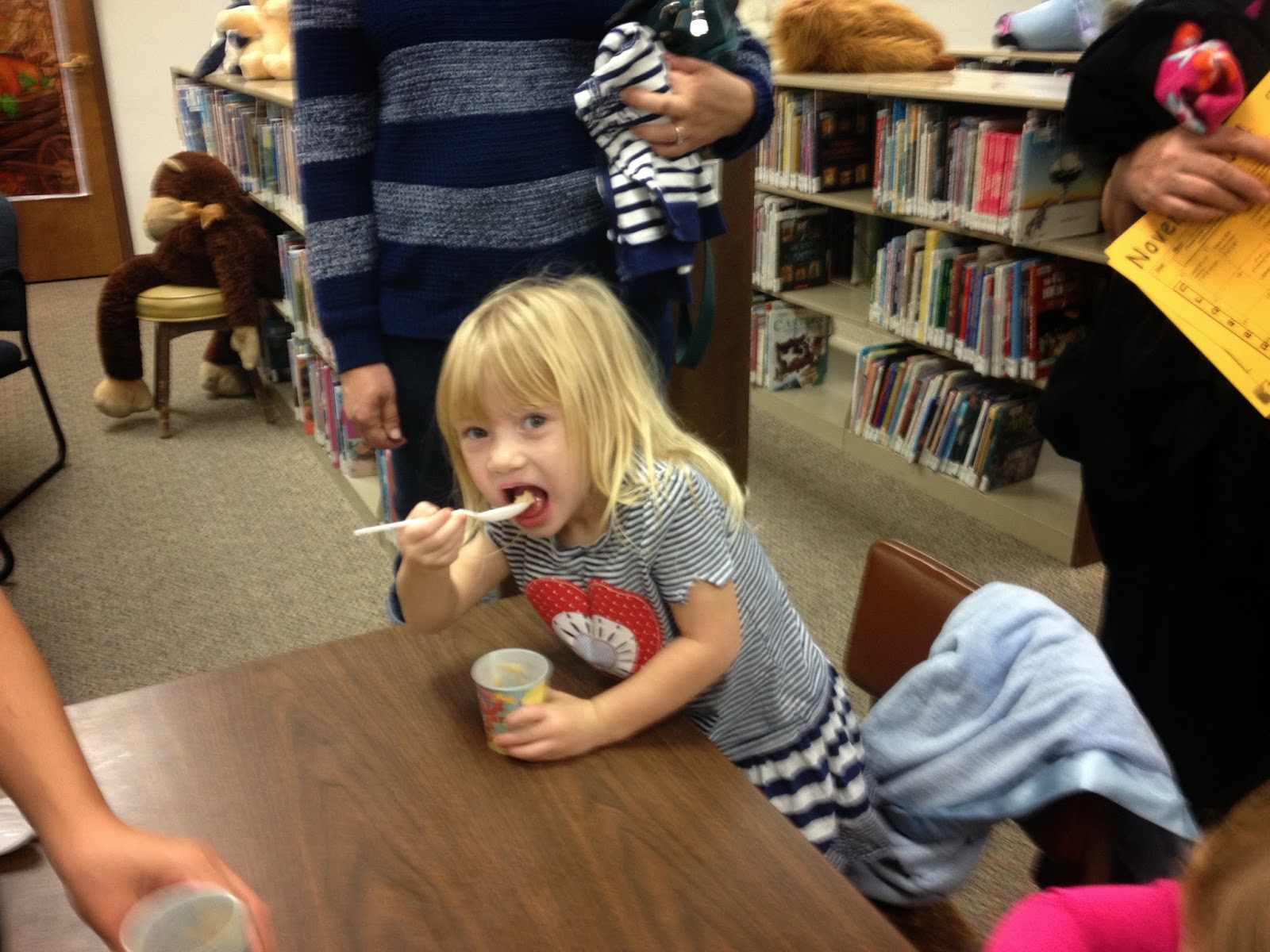 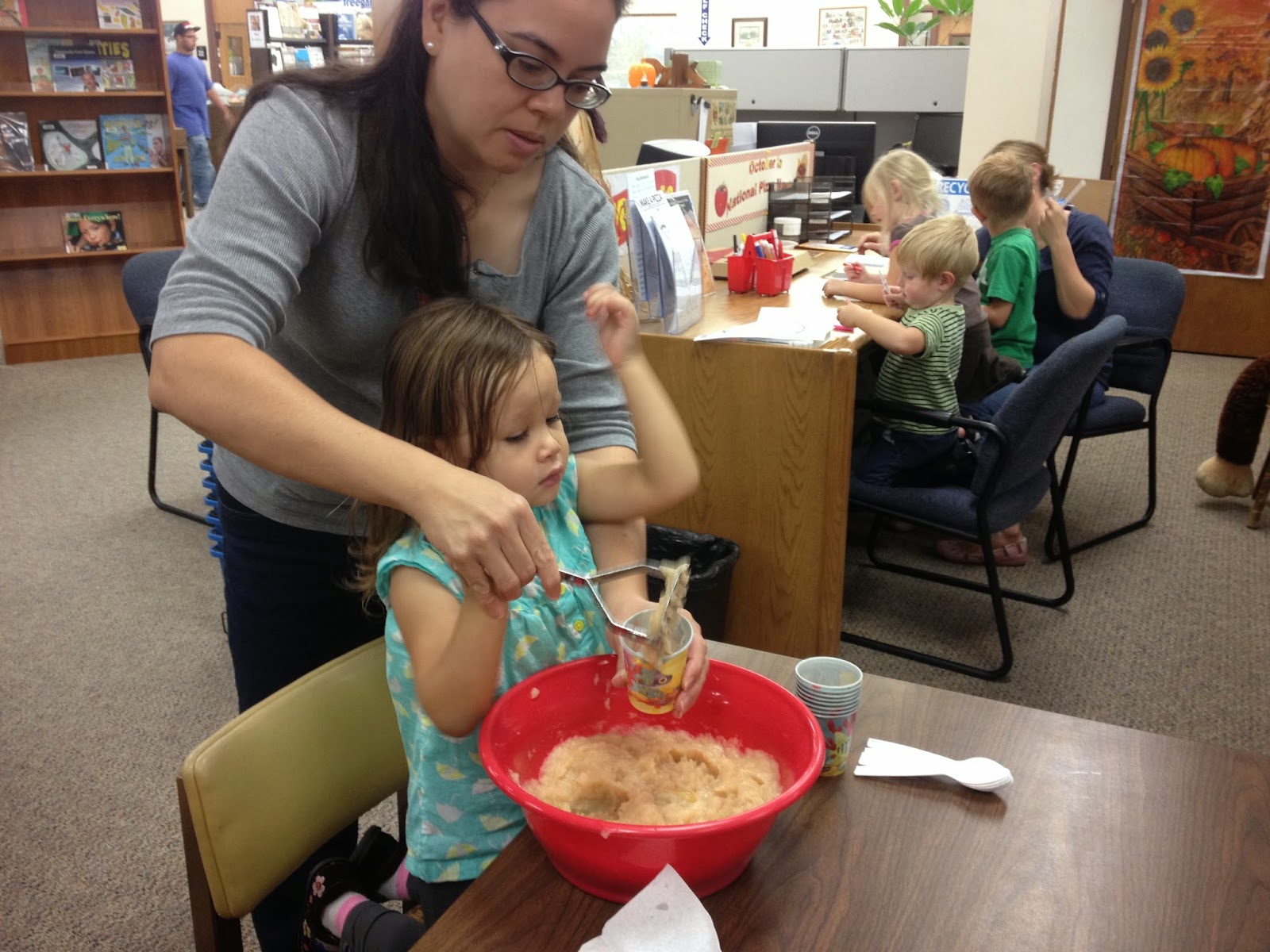 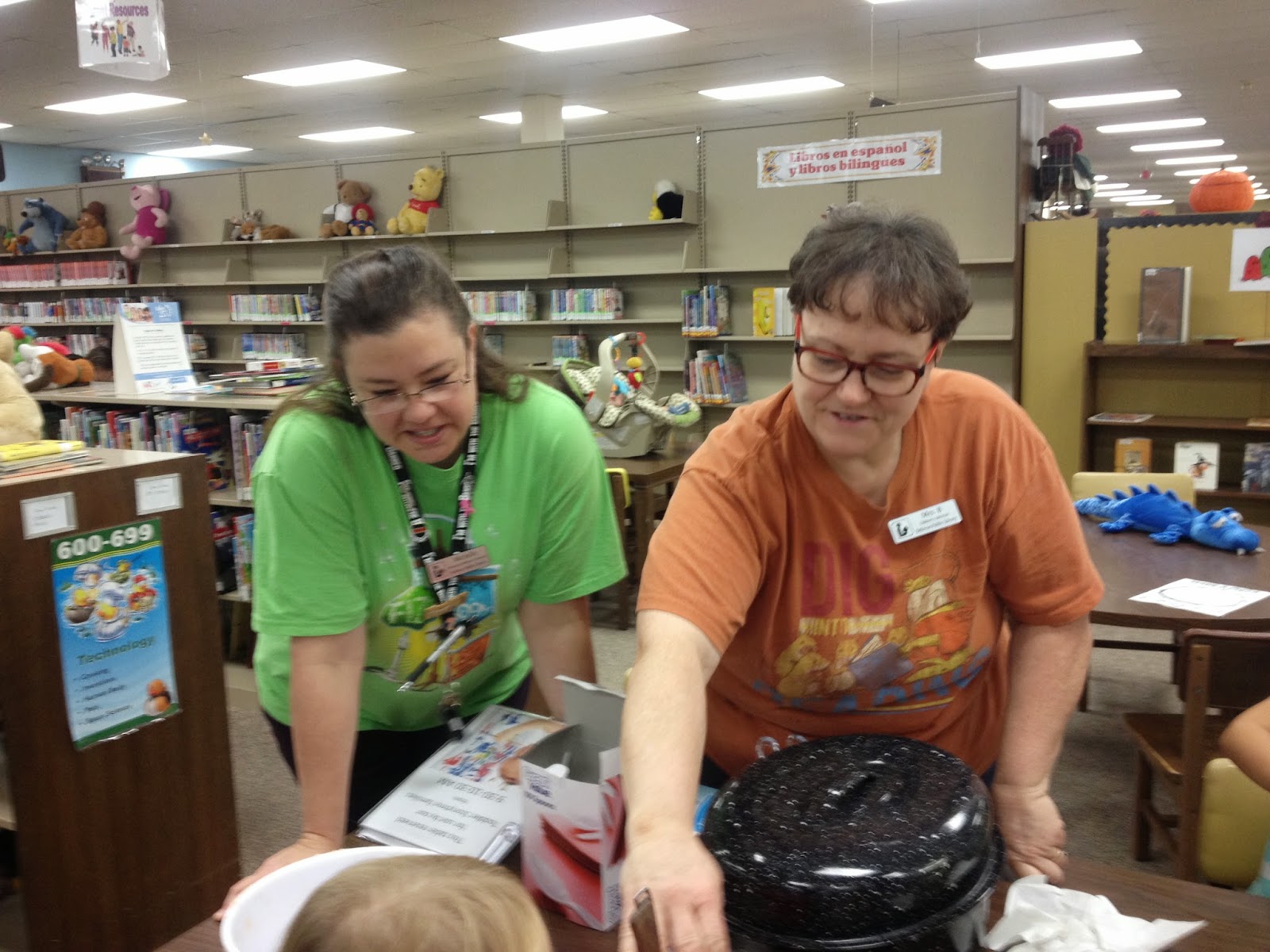 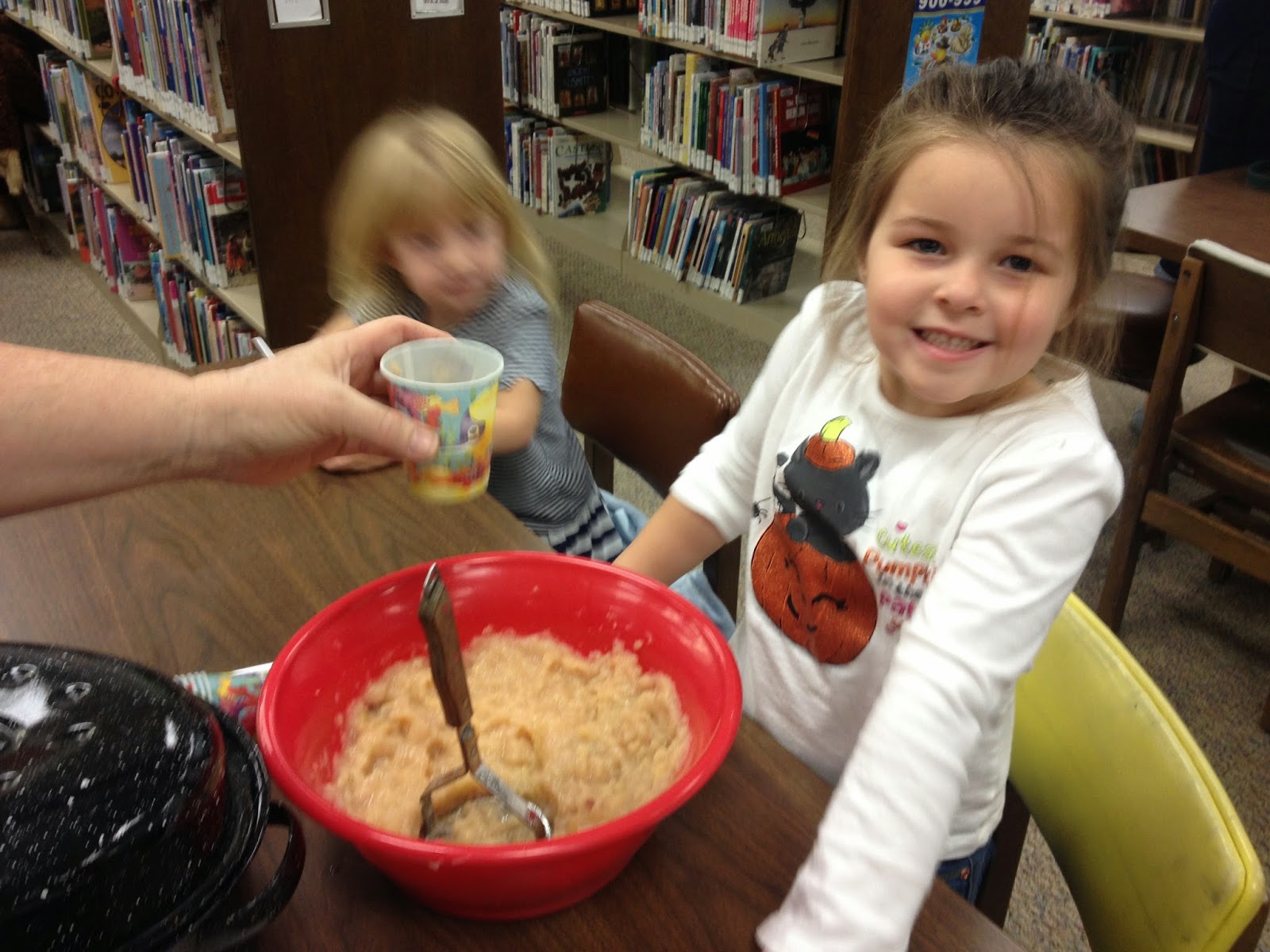 Each Toddler Storytime includes activities that support one or more of the five early literacy practices identified as essential in helping your child develop the skills they need before they can learn to read. The five practices – singing, talking, reading, playing and writing –were developed for Every Child Ready to Read®, an initiative of the Association for Library Services for Children (ALSC) and the Public Library Association (PLA).

Every Child Ready to Read® @ your library®, PLA and ALSC logos are registered trademarks of the American Library Association and are used with permission.